Killer whales, otherwise known as Orcas, are not whales at all! They are in fact, the largest of the dolphin family and while they are very social and live in pods like dolphins, that’s where a lot of their similarities end. With teeth up to four inches long, killer whales feed on almost any animal they find in the sea or air over the water or along the coastline including: sea birds, squid, octopuses, sea turtles, sharks, rays, fish, seals and other marine mammals. Orcas are apex predators meaning they are at the top of the food chain, and have no natural enemies. 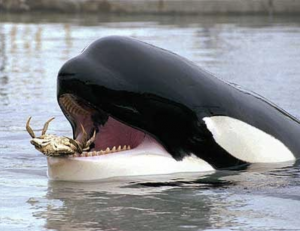 There are two different pod populations of killer whales – resident and transient. Transient pods act much like wolf packs and are much more aggressive. Since Monterey Bay is one of the top migrating zones in the world, the killer whales here tend to be transient and most prevalent during humpback and grey migrations. A pod usually consists of 5-30 whales led by the females, and work together to catch a meal. As one of the fastest marine mammals, Orcas can read speeds in excess of 35 mph!

Orcas pods (groups) consist of several females, calves, one or more males, and/or juveniles while other pods consist of just a mother and her offspring. A female killer whale will give birth every 3 to 10 years, to one offspring at a time. The gestation period usually lasts from 13 to 16 months. A baby orca is called a calf, and can weigh 400 pounds measuring up to 7 feet in length and remain with its mother for at least two years, although some never leave their mothers!

How do you tell the difference between a male and female killer whale? One identifying factor is their dorsal fin. A male dorsal fin can reach 6 feet high and is shaped like an isosceles triangle while a calf (young male) and female dorsal fin reach about 3 feet high and are curved (falcated). Killer whales are identified on an individual basis by the nicks, cuts, scars and indentations on their dorsal fins, much like humpback whales who are identified by the tail markings. Orcas are black and white for a reason; their coloring helps to camouflage them by obscuring their outline in the water.

One clue to spot a Killer Whale: If there is not much sea life around or the dolphins and sea lions are frantically swimming in one direction, this may indicate killer whales in the area and they are trying to outrun their predator. Do keep your eyes open since Monterey Bay does have killer whales!