The Most Common Marine Wildlife In Monterey

Monterey Bay whales are magnificent to watch in their natural environment. Often referred to as the Whale Watching Capital of the World, here are the most common whales you will see while whale watching Monterey Bay along with some other delightful creatures.

Grays, a baleen whale, are the most common whale seen in the Monterey Bay during the winter as they pass through on their journey south to their breeding grounds in Baja California and then again on their journey north to the Bering and Chukchi seas in Alaska. Gray whales reach lengths of up to 49 ft. and weigh up to 40 short tons. They opportunistically feed on mid-water prey during their migrations and live between 55 and 70 years!

Humpback whales, also known as the acrobatics of the sea, range in length from 39-52 ft. and can weigh up to 79,000 pounds. They are quite a sight to see when they breach and slap the water with their tail and pectoral fin! Humpback whales are seen in the Monterey Bay spring through fall, and occasionally in the winter. These whales come to this area specifically to feed on krill and small schooling fish.

Humpback whales are generally curious about objects in their environment; they will often approach and interact with boats. It’s not uncommon for whales to come up alongside the boat, or even swim beneath it. Captains nicknamed these events “whale muggings” because legally they cannot move the boat until the whale has departed! From this close you can hear the blow (an exhalation at 300 mph) and the loud slaps of tails, flukes, and breaches.

The most massive creature on earth ever is seen mid-summer through the fall. The blues we see here in the northern hemisphere reach lengths of about 80-98 feet and weigh up to 200 short tons – it is believed to be the largest animal ever to have lived. Their dorsal fin is small ranging in height from only 3.1-27.6 inches. Blue whales have twin blowholes shielded by a large splash guard. Blue whales can reach speeds of 31 mph but slow it down to feed at 3.1 mph.

Season Most Active: Mid-summer through Fall

The Killer Whale aka Orca aka Blackfish or Grampus, a toothed whale, is actually the largest member of the dolphin family. Transient killer whales that feed almost exclusively on marine mammals are seen periodically throughout the year. They are regarded as apex predators meaning they lack any natural predators. It has one of the largest dorsal fins at up to 6.6 feet tall and has a heavy and robust body.

Named after Right Whales due to their lack of dorsal fins, Northern right whale dolphins are very sleek looking animals with a small and slender body. They travel in groups of 5-200 and sometimes up to 2000! Often very playful, these dolphins love to ride the bow of a ship. These graceful swimmers area also occasionally spotted doing acrobatics, such as breaching, belly-flopping, side slapping, and lob-tailing. Monterey Bay has been determined as the best place in the world to view these creatures.

Risso’s dolphins are seen throughout the year. They are very colorful animals and extremely fast-moving. Their preferred environment is on steep banks, which makes perfect sense since they like the Monterey Bay Submarine Canyon. They feed almost exclusively on squid and travel in groups of 10-51, sometimes up to 400 at a time. They love surfing bow waves, waves of gray whales, and ocean swells – make sure to keep an eye out for the at the front (bow) of the Sea Goddess as they love riding our bow!

Common dolphins are seen throughout the winter often in impressive numbers. They can live in groups of hundreds or even thousands of dolphins. Common dolphin have a carried diet consisting of many species of fish and squid. These fast swimmers at up to 40 mph are also aerial acrobats, love riding the bow of boats and can dive up to 660 ft. deep! They are very colorful animals and extremely fast-moving.

Dall’s propoises is a species of porpoise found only in our area of the North Pacific. They have a unique body shape with a very thick body and a small head. Their color is quite similar to the killer whale with a very dark gray to black body. The Dall’s like to stay close to the deep-water canyon, which explains their population in the Monterey Bay Submarine Canyon. They eat small fish including, herrings, anchovies, mackerel, and more. Dall’s porpoises are deep divers and have been recorded to dive 308 feet. Dall’s are prey to both killer whales and white sharks.

Sea otters are a marine mammal native to the coast of the North Pacific Ocean which explains why Monterey Bay has such a huge population. Weighing between 31-99 lbs., sea otters are actually the heaviest members of the weasel family but are among the smallest of the marine mammals. It preys mostly on marine invertebrates such as sea urchins and crabs, along with clams, mussels, and other tasty treats. Sea otters are one of the few animal species that use tools. They use rocks and other objects to open up clams, crabs, and other food. Although each adult and independent juvenile forages alone, sea otters tend to rest together in single-sex groups called rafts. A raft typically contains 10 to 100 animals, with male rafts being larger than female ones. To keep from drifting out to sea when resting and eating, sea otters can be seen wrapped in kelp. Unlike most other marine mammals, the sea otter has no blubber and relies on its exceptionally thick fur to keep warm. Sea otters are seen on practically every trip.

Sea lions are extremely intelligent creatures with big personalities. Most of the sea lions we see in the Monterey Bay are males, as the females prefer warmer waters farther south. These mammals are characterized by external ear flaps, long fore-flippers and are able to walk on all fours. With a life span of 20-30 years, a male sea lion averages about 660 lbs. while the female is significantly smaller at 220 lbs.

Harbor seals are beautiful animals ranging in color from brown, tan, or gray with spots and tend to be solitary. They can be up to 6.1 ft. long, weigh up to 290 lbs., and live 20-35 years. Harbor seals stick to familiar resting spots or haul-out sites, generally rocky areas where they are protected from adverse weather conditions and predation, near a foraging area. They are preyed upon by killer whales aka Orcas and white sharks. Females bear a single pup after a nine-month gestation, which they care for alone. Breeding occurs in California from March to May, and pup between April and May, depending on local populations. As top-level feeders in the kelp forest, harbor seals enhance species diversity and productivity.

Spotting a leatherback turtle is a rare and delightful occasion. These turtles can get 6-7 feet long, is the largest of all living sea turtles and is the fourth largest reptile behind three crocodiles. A major differentiating characteristic from other modern sea turtles, is its’ lack of a bony shell, rather covered only by skin and oily flesh. Leatherback turtles can dive up to depths as great as 4,200 feet and can occasionally be seen feeding on jellyfish in the summer.

A great source for more information on Monterey Bay Whales can be found at NOAA. 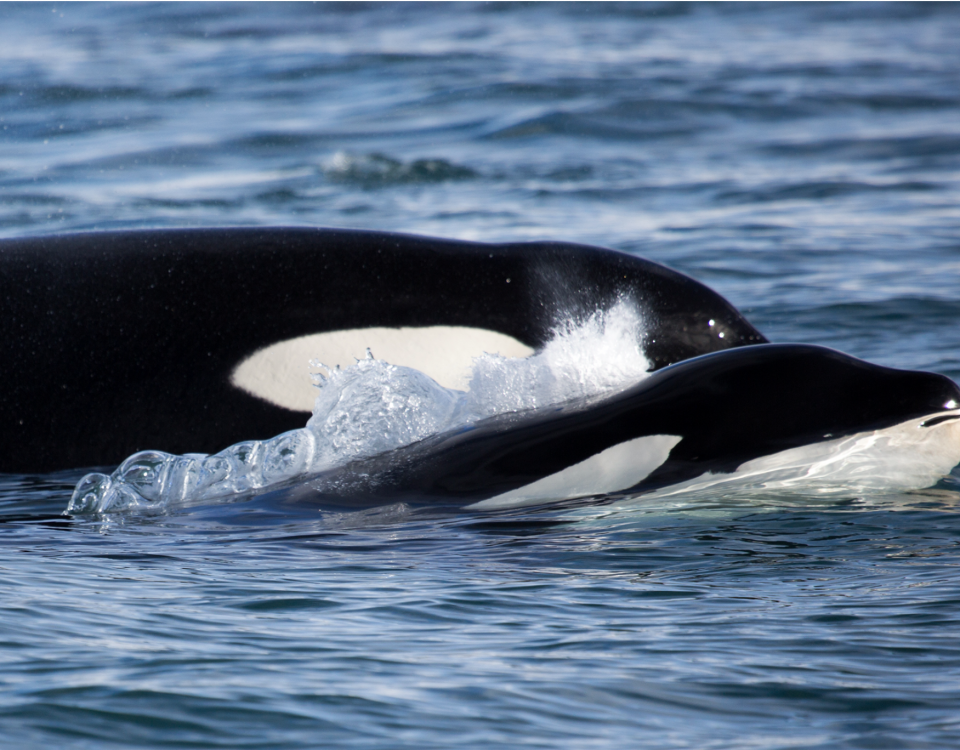